Everybody loves going on vacation. Leaving the routine and the daily tasks behind and going visiting a new place, staying at hotels, waking up without alarm clock… but there is a down side too. The flights can be loing and stressfull, tourists tend to forget and lose more and as you go in unfamiliar ways, there is a chance off getting lost and confusing between places. Don’t worry! A sorrow shared is a sorrow halved! You will not be the first one to be wrong. A long line of travelers and pilgrams were wormg before you. Here are some places that got their names because of mistaken identification.

The champions of wrong identification of places are the Crusaders. They came to Israel with religios passion and zero geographic understanding. Acre was the Crusaders main port city and served for 100 years as the capital. When they came, they confused Acre with Ekron, a Philistine city that was in the southern part of Israel. One o the Philistine gods was Beelzebub (or Lord of the Flies). The god Beelzebub is mentioned a few times in the bible and it became to be one of the names of the devil (and the  name of a bestselling dystopian novel by  William Golding – Lord of the Flies).
Next to the entry to the port of Acre there was a fortified building that was first built in the 3rd century. The Crusaders thought it was a temple for the Lord of the Flies and named it the Flies Tower. Later it was a mosque and a British cannon’s position and the wrong name stayed until today. 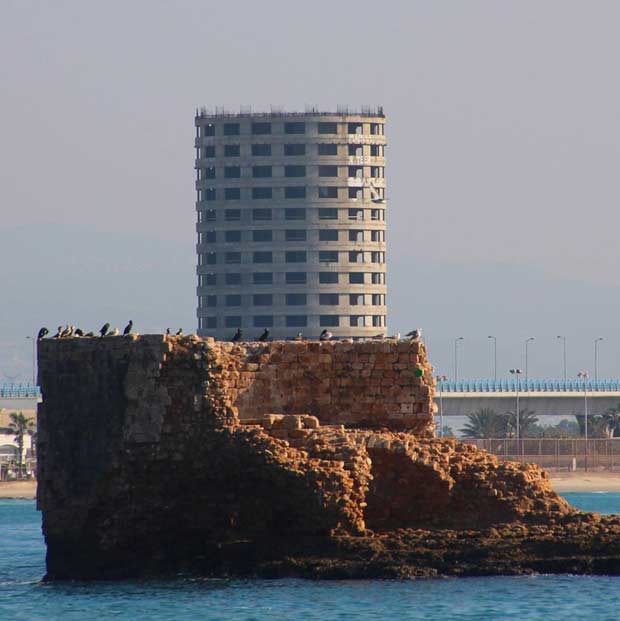 Safed and Daughters of Jacob Bridge

One of the biggest wrong identifications of the Crusaders is a double mistake that is connected to Jacob. The Crusaders identified Safed as Bethel. Bethel is first mentioned in the bible when Abraham entered Canaan, the second time is the story of Jacob dream. Jacob fall asleep and in his dream he sees angles going up and down a ladder that connects heaven and earth. In the dream god promise Jacob that the land that he sleep on will be his and his descendants. As Jacob wake up he took the stone that was under his head and set it as a pillar. The Crusaders called Safed Bethel and from this mistake comes the second one – Daughters of Jacob Bridge. The bridge over the Jordan river not far from Safed. The bridge got the name Jacob because the Crusaders thought that there Jacob cross the Jordan river as he went to meet Esau, his brother. At the Crusaders time there was in Safed a monastery of the sisters of St. James. The monastery was financed also from taxes that the Crusaders collected at the bridge and this is why the bridge got the name Daughters of Jacob. 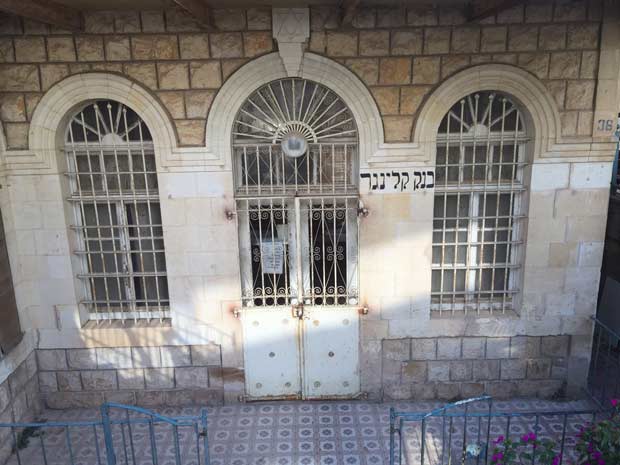 Mount of the Leap of the Lord (or Mount Precipice)

The mountain top offers a good view of Nazareth and Jezreel valley. In the new testament it is written that Jesus spoke in the synagogue of Nazareth and implied that he is the Masaya. His speech made the Jews angry and they took him out of the synagogue and wanted to hurt him but Jesus went between them and disappeared. A tradition from the  Crusaders time saw this mountain as the place where Jesus disappeared from the crowed and jump to the Jezreel valley. Today it is known that the mautain is too far from the city center.

The tower of David

Next to Jaffa Gate in the Old City of Jerusalem there is a Citadel. It is located in a strategic place and diffended the city for hundrends of years. The name Tower of David was given by byzantine pilgrams that thought that king David built it but the citadel was built by king Herod. At the time of king Herod the citadel was much bigger and impressive. Until the british came in 1917 the citadel served for military perpose and since then it holds a museum inside. 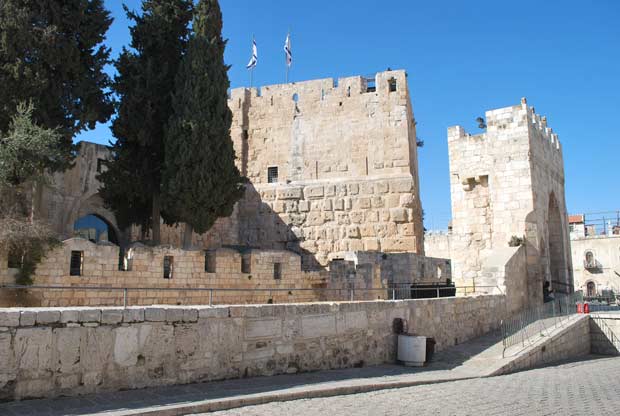 The Tomb of king David

Unlike other important biblical figures, the bible tells us exactly  where David was buried.’then David rested with his ancestors and was buried in the City of David’ (1 Kings 2,10). The only question is – where is the city of David? The ancient Jerusalem, the city of David, which today is actually outside the city walls, was forgotten. The name Zion, which is one of the names of Jerusalem, had many transitions, and today Mount Zion is also outside the city walls. On Mount Zion there was a church in which they commemorate king David. As time went by they started to mark David grave as well. Jews and later Muslims started to follow this tradition as well. Today it is known that the City of David is situated one hill to the west of Mount Zion and yet Jews come to pray on Mount Zion. 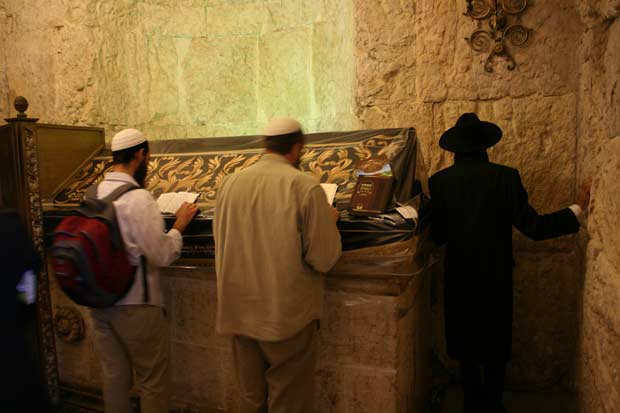 On raod number 1, The road that climb to Jerusalem , there is a junction name Latrun. Next to the junction there is a Trappist Monastery and Yad la-Shiryon, which is a tank Museum. The Crusaders built next to the junction a fortress named Le Toron des chevaliers, which means in latin the knights tower. The Arabs that leaved in the area didn’t pronance the name right and called the the place Latrun. Years later, when pilgrams did their way to Jerusalem they heard the name Latron which remaid them the word Latronis, which means thief in latin. From this mistake started a tradition that Dismas, the good thief that was crucified next to Jesus, grew up in the  area.

In the northern part of Mount Olives there is a small church that is not open to visitors that is called Viri Galilaei. The name is latin for the people of the Galilee and it is taken from Acts (1,10-11) ‘They were looking intently up into the sky as he was going, when suddenly two men dressed in white stood beside them. “Men of Galilee”, they said, “why do you stand here looking into the sky?’.  The two men saw Jesus assend to heaven. Many thought mistakenly that the north part of Mount Olives is actually the Galilee. In the middle ages, when the Galilee wasn’t safe, many tour guides tolled the pilgrims that this is the Galilee and many traditions were moved to Mount Olives.

The places in the summer residence of the Patriarchate of Constantinople and in this place there was a historical meeting in 1964 between Athenagoras, the head of the orthodox church and Pope Paul the 6th. The first meeting after 910 years of separation between the Orthodox Church and the Chathlic Church (the East-West schism that occerd in  1054).

Mistaken identifications are not only something that belongs to the past. Some are from modern times. When the German Templers founded their 3rd colony they thought that they settle in the Sharon, which is an area north to Tel Aviv. Today Sarona is in the middle of Tel Aviv. 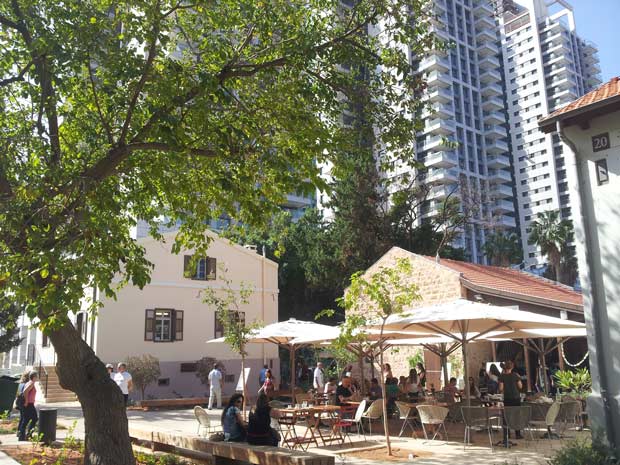 In this case the mistake is not a tomb or a citadel but a city. After the establishment of Israel many settlements were named after biblical places. In 1954 Kiryat Gat was established and the name was given because it was thought that the arciological site next to it was Gath, a philistine city that is mentioned in the bible. Excavation in the site didn’t came up with any finding from that historical pirod and most archeologist think that Gath was in a different place which today is called Tel es-safi. The archeological site next to Kiryat Gat is called noe Tel Irany, but the name of the city stayed Kiryat Gat.