Rosh HaNikra is a nature reserve at the northernmost end of the shore of the state of Israel. The meaning of the name is ‘head’ (rosh) of the ‘grottoes’ (nikra). Upon visiting the site you can understand why the name was chosen. Rainwater trickles through crevices in the chalk rock and forms underground spaces. The waves pound the cliffs and gradually carve out the grottoes. In among the white chalk you can see small dark flint rocks. Flint is a rock that forms as the result of a chemical change in compressed sedimentary rocks like chalk or limestone, but it is not clear exactly how it forms.

But not all the underground spaces at Rosh HaNikra were formed millions of years ago. Some were built in 1942, during World War II. The British, who controlled Egypt and the Land of Israel, wanted to build a railway from the Middle East to Europe via Turkey. Over a year and a half, South African and New Zealand troops built fifteen bridges and caves through the cliffs. After the war the authorities considered making civilian use of the railway but due to the political situation it never happened.

The only civilian train that passed through Rosh HaNikra was transport 222. In June 1944, 222 Dutch Jews who had been held in Bergen-Belsen by the Nazis were exchanged for German Templers held by the British in the Land of Israel. It was one of very few deals made between the Nazis and the British.

In March 1948, the Palmach, part of the pre-Israeli underground army, blew up one of the bridges to prevent the Lebanese army from entering Israel. The tunnel that leads to Lebanon was later sealed. 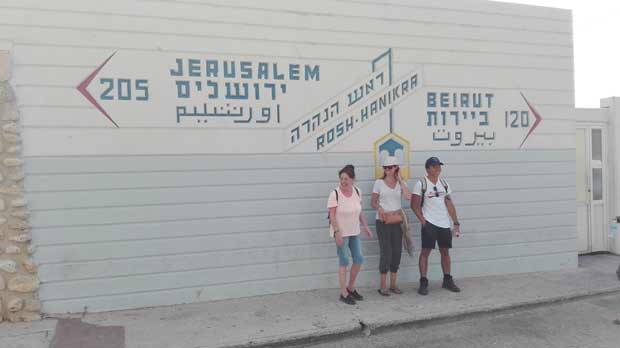 The border between Israel and Lebanon.