Capernaum - The Town of Jesus (from the first century until today)

Referred to in the Bible as the town of Jesus, Capernaum is located on the northern shore of the Sea of Galilee, in northern Israel.
It lies close to many other important biblical sites, such as Tabgha, the Church of the Beatitudes, and the Church of the Primacy of St. Peter, all of which are often mentioned in the New Testament.

The name ‘Capernaum’ has its origins in two Hebrew words: ‘kfar’ means village and ‘Nachum’ is a man’s name – Nachum’s village. It is not clear which Nachum the name refers to.
At the entrance to Capernaum is a sign that reads ‘Capharnaum the town of Jesus’. In the New Testament, too, Capernaum is referred to as the town of Jesus.
How is it that this small village, and not Jerusalem or Nazareth, came to be the town of Jesus? 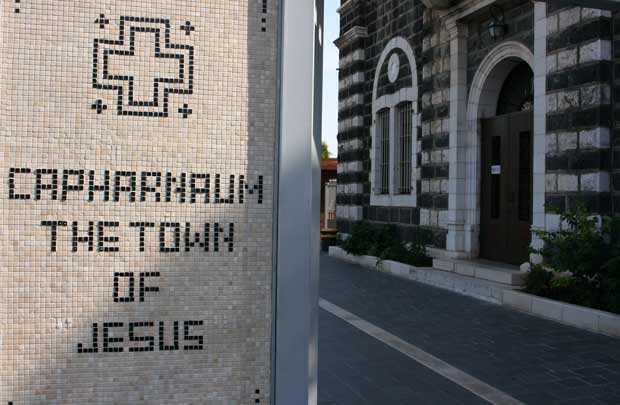 Jesus was born in Bethlehem and grew up in Nazareth.
After being baptized by John the Baptist in the Jordan River, Jesus returned to Nazareth. However the people of Nazareth rejected him and so he traveled to Capernaum.
Jesus visited Jerusalem many times and that is where he was crucified, buried and resurrected, but the time Jesus spent in Jerusalem was relatively short.
Capernaum is where Jesus lived as he carried out his mission.
Most of the chapters in the New Testament describe what happened when he was living in Capernaum – from his baptism to the last week of his life.
Jesus chose his twelve disciples in this area on the northern shore of the Sea of Galilee. Five of them – Peter, Andrew, James, John and Matthew – came directly from Capernaum and all the other disciples came from the Galilee area.
The only one who didn’t come from the Galilee was Judas Iscariot, who would later betray Jesus.
Capernaum is mentioned more than fifty times in the New Testament, making it the most-mentioned place after Jerusalem.
The teachings, allegories and preaching of Jesus originate in this area – he speaks of water, ships, fish and fishermen.
Jesus chose to live in Capernaum and not in Tiberias, which was a bigger and more important city, because he wanted to be close to the Golan.
Herod Antipas ruled the Galilee and persecuted the followers of Jesus. It was he who murdered John the Baptist.
Herod Philip II ruled in the Golan and he didn’t persecute the first Christians. And so Jesus would be able to easily move to the Golan in times of danger.
He wanted to stay in the Galilee because that was where most of the Jews lived.
Although Capernaum was a small village, it was near an important road that led to Damascus. It was a good place to meet and influence people.

At the entrance to the village is a building that looks like a space shuttle. This church was built by the Franciscans in 1990. The Franciscans bought the premises in 1894 and excavated the site before building on it. 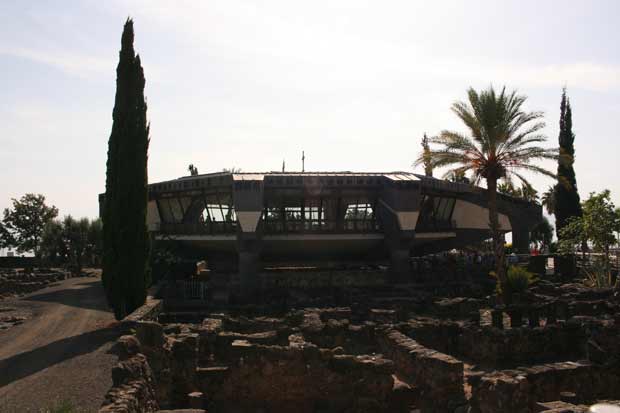 Many churches in Israel integrate the archeological findings of ancient churches that had previously been destroyed.
In this case, they decided to build a modern church that hovers above the ancient church, supported by external pillars.
The church has an octagonal shape that draws the focus to the center, where there is a glass floor. It is located above an ancient room that has been identified as the house of St. Peter.
This is considered to be the first gathering place of the followers of Jesus – the first church.
The site is also known by its Latin name – Domus Ecclesia. The house of Peter is located in an area of simple housing, which later came to be known as Insula Sarca, or the holy quarter.
The house is mentioned in the New Testament as the place where Jesus healed Peter’s mother-in-law, among many others.
From the middle of the 1st century on, the house came to be considered a pilgrimage site.
Layers of plaster on the walls were found to bear inscriptions mentioning Jesus in a couple of languages as well as other Christian symbols.
Archeological findings indicate that the site was maintained for a few generations and attracted visitors.
In the 5th century, the site became an octagonal church, which is mentioned in texts written by pilgrims. In the 8th century, the church was destroyed.

On the square in front of the church is a modern statue of St. Peter holding keys and a shepherd’s staff.
The statue was erected in the year 2000, before the visit of Pope John Paul II.
St. Peter is considered to be the first Pope and therefore sites connected to Peter are important to Catholic pilgrims.

But Capernaum is significant for all followers of Jesus as it is one of the few sites that you can actually see. Visitors are able to walk through a site that is practically unchanged since the time of Jesus.

The Synagogue in Capernaum

North of the church are some simple basalt houses. No sewage or drainage systems were found. Capernaum was a small to medium-sized twon. Most of the inhabitants were fishermen or farmers. The big white synagogue stands in contrast to the small black houses around it. 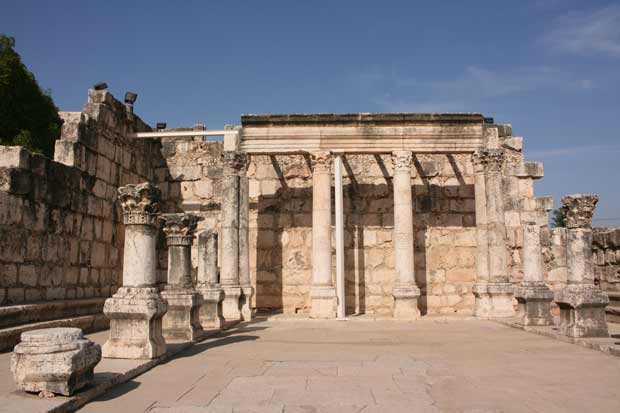 The synagogue was discovered in 1838 and excavated by Heinrich Kohl and Carl Watzinger, two German archeologists who researched ancient synagogues in the Galilee.
It was built in the 4th or 5th century. The white limestone, which was brought in from much further afield, as well as the ornamentation indicate that a wealthy Jewish community thrived here in the Byzantine era.
Nowadays most visitors come here not to admire its beauty but because it was mentioned in the New Testament. Although it was built five hundred years after Jesus’ time, the Franciscans claim that the synagogue actually dating from Jesus’ time is under the one that stands today.
It is a reasonable claim since in many places synagogues were built on top of ancient ones (just as churches were).
A miracle took place in the synagogue on a Saturday: Jesus drove an impure spirit out of a man (Luke 4, 31-35). Interestingly enough, the man possessed by the demon was the same one who identified Jesus as ‘one of God’.
The evil was the first to identify the good.
In the synagogue, Jesus also clarified one of his most important miracles – the multiplication of the loaves and fishes.
He explains the importance of bread in Christianity and the meaning of the mass.
In the archeology garden around the synagogue are pillars and capitals that were found in the excavations. On some of them you can spot Jewish symbols.
Although Jesus performed many miracles, he ultimately came to curse the people and declare that their destiny would be worse than that of the people of Sodom because of their disbelief.
But Capernaum continued to exist for many years. Capernaum didn’t take part in the rebellions that occurred in the 1st and 2nd centuries. For hundreds of years, both Jews and non-Jews who believed in Jesus lived side by side.
It wasn’t until the Muslim era, in the middle of the 8th century, that Capernaum was destroyed, probably in the big earthquake of 749.

For more than a thousand years the location of Capernaum remained unknown, until British archeologist Charles Wilson identified the site in 1866. The Franciscans bought most of the site at the end of the 19th century and started to excavate it.
Today Capernaum is an archeological site run by the Franciscans. Next to it is the Greek Orthodox Church of the Holy Apostles. 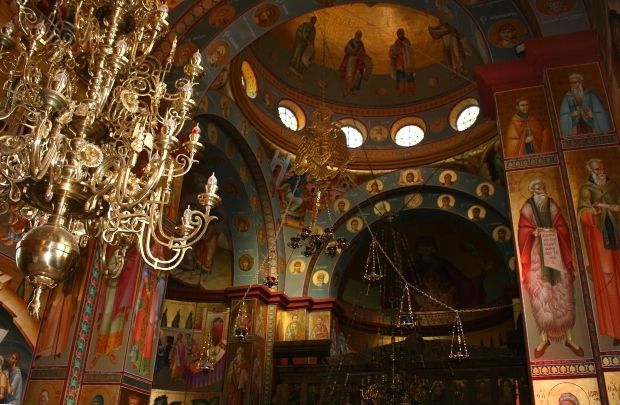