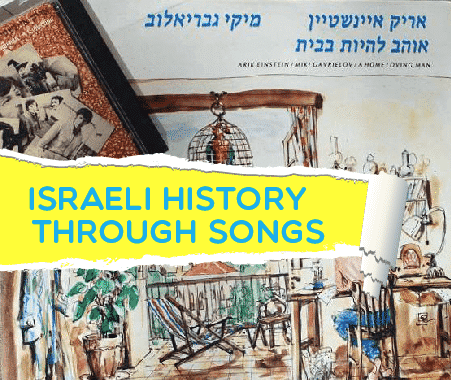 Unlike historical periods and events, music stays around. Although these songs are in Hebrew, they’ve strayed from the language that they were written in and outlasted the period during which they were performed. These ten songs reveal the history of Israel.

Hareut (The Friendship – the Nachal Band)

The state of Israel was established during a war. The United Nations proposed to divide up the land into a Jewish state and an Arab state. The Jews agreed to the proposal but the Arabs refused and began the war that later received the name the “War of Independence.” One percent of all Jews in Israel during that time were killed during the war. A third of them were citizens, not soldiers. Therefore, it wasn’t surprising that many of the first songs composed in Israel were written about the war. This song was called ‘Hareut’ (The Friendship) and it is about friendship during the war. This version is performed by the Nahal Band, the most known military band that performed for soldiers. Almost all of the important Israeli singers up until the 1980s started out as singers in the military bands. This was the favorite song of Yitzchak Rabin, the Israeli Prime Minister who was murdered in 1995.

The Worker’s Party led Israel’s institutions from before the country was established and up until 1977. The orientation of many of the leftist parties was to the Soviet Union, up until the middle of the1950s when the Soviet Union’s anti-Semitism was exposed. A love affair between Israel and France began around the Suez crisis in 1956. Israel suffered in the beginning of the ’50s from terrorist attacks that came from Egypt, and France and Great Britain wanted to retain the control of the Suez channel, which the Egyptians had been nationalized. Israel, France, and Great Britain joined together and were involved in an operation against the Egyptians. The good connection between Israel and France lasted until the Six-Day War in 1967. Russian songs and French chansons accompanied Israel’s soundtrack during the ’50s and the ’60s. This song was very popular in Israel and yet not many Israelis know that it is actually a French chanson originally written by Charles Aznavour.

This is without a doubt the most important Israeli song of all time, and it was written about the most important event in the history of Israel – the Six-Day War in 1967. This song is called “Jerusalem of Gold,” and it was released three weeks before the beginning of the war. The paratroopers who first liberated the Wailing Wall sang this song in triumph and after the war, the poet Naomi Shemer, added the last verse. The album “Jerusalem of Gold” was the most widely-sold album in Israel. There wasn’t a home in Israel that didn’t have a copy of this record.

Rock ‘n’ roll came late to Israel. The High Windows were the first pop-rock Israeli band and were formed in 1967. This band was the harbinger of the growing closeness and influence of America’s culture on Israel’s during that period. This influence has continued to grow in the last 20 years. The video of this song was the first video clip released in Israel.

The Yom Kippur War in 1973 caused a rift in the faith the Israeli public had had in the Israeli government. Consequently, Kaveret, a very successful rock band in those years, didn’t sing about the settlement of Israel or other morale songs but sang paradoxical songs of escapism. Kaveret was the first band to introduce the electric guitar to the Israeli mainstream.

Israel has never been accepted by its Arab neighbors and always saw itself as closer to the democratic Western European countries. From the year 1973, Israel has participated in the Eurovision (the annual European Song Contest). Listening to the Eurovision songs today is a bit embarrassing, but in the 1970s, the Eurovision was very important in Israel. In 1978, Israel won the contest for the first time but because Israeli television didn’t purchase enough satellite broadcasting time, the broadcast was cut a few minutes before Israel was declared the winner. The following year, the contest was held in Israel and the Israeli song “Hallelujah” won. It was one of the first broadcasts in color on Israeli television.

Haperach Begani (The Flower in my Garden – Zohar Argov)

In 1977, there was a political turnabout and a rightist political leader, Menachem Begin, was elected for the first time. Although Menachem Begin and his party’s people were Ashkenazi Jews (Jews descended from the local Jewish communities in Europe) and their ideas were all of European descent, his election symbolized the rising of other voices in the Israeli society – the religious Jews and the Mizrachi Jews (Jews that were descended from the local Jewish communities of the Middle East and northern Africa). When it came to music, these other voices were the singers who were influenced by Arab music. Zohar Argov isn’t the first but he’s definitely the most important of all of the artists who sang in this style. “The Flower in my Garden” won first place in the Eastern Singer Festival in 1982.

Im Ninalu (If They Were Locked – Ofra Haza)

Israeli society during the 1980s was divided – the Lebanon War, which began in 1982 and lasted up until the year 2000, was to Israel what the Vietnam War was to the United States in the 1960s. Economically speaking, Israel had begun to move from a market-concentrated economy to a capitalist economy, a decision which caused many ripples and financial crises. The musicians responded with a return to their parents’ origins, meaning their music was influenced by Hasidic, Greek, Arab, and Yemenite genres. This song by Ofra Haza became a worldwide hit and was a portent of the world music fashion that was to come.

During the 1990s, during the Oslo agreements, many Israelis believed that peace was just around the corner, but then the continuing terrorist attacks during that period disillusioned them. The murder of Yitzchak Rabin, the Israeli Prime Minister, by a Jewish assassin was one of the great crises between the left and the right.Unlike many other places in the world where rock music was considered a rebellion against the system, in Israel, rock music wasn’t accompanied by dissent. Aviv Gefen’s music was the closest thing that came to “protest music” in Israel. He was the first artist to write songs about depression and separation.

During the first decade of the 21st century, the security situation has continued to occupy Israeli society, especially the Iranian threat. During the last few years, Israelis have begun to understand that the nuclear abilities of Iran isn’t their only threat and have begun to protest the high prices of housing and low wages that exist in Israel. The new cultural heroes aren’t from the military bands anymore but from reality TV shows. Ninette Taib was the first winner of the “Cochav Nolad” (“A Star is Born” contest), and she’s the most known singer who became famous from a reality TV show.

…
If you’re planning a trip to Israel and want my team to build you a whole package including luxury hotels, guides and attractions, then you can schedule a call here.

If you’re traveling on a modest budget, you can also purchase my Booklets, in which I basically wrote down everything that I say on my 3 most popular tours: Jerusalem, Tel Aviv, and the Judaean Desert. I also added maps, pictures and graphics which will enable you to be your own guide. The booklets are only sold outside Israel, so order now and come prepared! Or download as a PDF or EPUB (e-book).

Planning your trip to Israel?

I want my internet site to be the best source of information about traveling to Israel. For that to be the case, I need your help. I want to know what you want to know, so if you have any questions, please write them down here and I will do my best to answer them!
Tweet
Share
Pin1
Share
1 Shares