The small church of the Beatitudes is located on a hill north of the Sea of Galilee, not far from Tabgha, Capernaum and the Church of the Primacy of St. Peter. You’re better off traveling there by car or as part of an organized tour rather than taking public transportation.
Entrance: Free, but there is a parking fee.
opening Hours: 12:00-08:00, 17:00-14:30 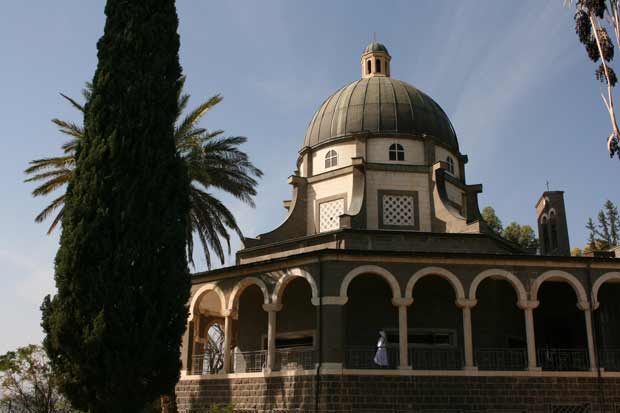 The Sermon on the Mount is the essence of the teachings of Jesus and one of the most important texts in Christianity. In it Jesus defines the core principles of Christianity and it is considered to be one of the first manifestoes for non-violence. Later in the text, in verse 17, Jesus says:  “Do not think that I have come to abolish the Law or the Prophets; I have not come to abolish them but to fulfill them.” Many years later Christianity became a separate religion but it is important to remember that Jesus was a Jew who preached to Jews. The ideas that Jesus preached, which sanctify humility and poverty, are close, both in character and vocabulary, to the ideas of the Essenes, a Jewish sect that lived in Qumran (next to the Dead Sea). In Jesus’ time, the end of the Second Temple period, there were many groups and individuals calling for reform and a return to the moral values that the prophets preached, in contrast to the corruption of the priests in Jerusalem.

Many modern churches in Israel were built where ancient churches once stood, in order to be as close as possible to the actual sites where Jesus preached and performed miracles. This is the case with Tabgha, Gethsemane and many other churches that integrate archeological findings from the Crusaders, or from the Byzantine church that once stood there. The remains of the Byzantine Church of the Beatitudes were found next to the shore of the Sea of Galilee and yet Antonio Barluzzi, the Italian architect, decided to locate the modern church a couple of hundred meters higher up on a hill. Barluzzi wanted to emphasize the spirit of the Sermon on the Mount and make the most of the beautiful view of the Galilee, the area where Jesus carried out his mission. Unlike many other churches, this one doesn’t commemorate a site where Jesus performed a miracle or an important event in his life, but rather his teaching. 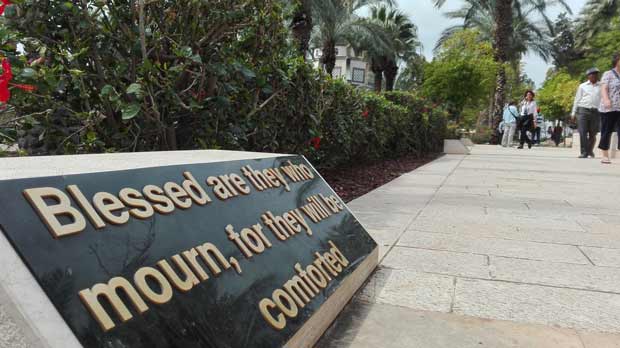 The church of the Beatitudes is surrounded by a beautiful garden. Along the path that leads to the church are verses taken from the Sermon on the Mount. Barluzzi tries to tell a story with the churches he designs and here he built an octagonal church. Usually the focus of octagonal churches is a site in the center, but in this case the eight sides reflect the eight verses. There are panoramic windows at eye level to emphasize the spirit of the teaching and not the building itself.
On the floor of the church you will see listed the seven virtues: chastity, temperance, charity, diligence, patience, kindness and humility. On the 8th side, in front of the entrance, there used to be an inscription dedicated to Benito Mussolini, the Italian fascist dictator, stating that the church was built in the 15th year of his rule. The reason for this is that the Italian government helped finance the site. In 1970 the inscription was changed to ‘Lavs Tibi Christe’ – We adore you Christ.