The Church of the Annunciation - why is the church so new?

Visiting the Church of the Annunciation

The Church of the Annunciation is one of the most important churches for Catholics in Israel. Most of the other sights in Nazareth are within walking distance. Knees and shoulders must be covered. 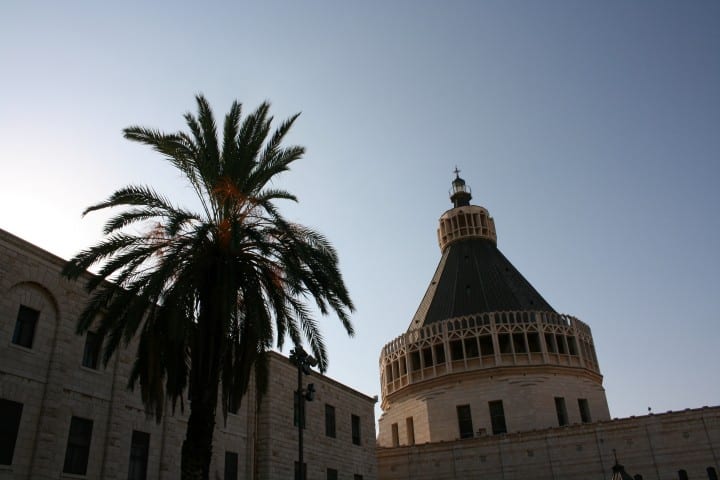 The History of the Church of the Annunciation

The church commemorates the first event of Christianity, but as you will see it is a modern, new church. Although all the churches in Israel should be 2,000 years old, many of them are new. The reason for that is that for its first 300 years, Christianity was an illegal religion. Only after Constantine the Great converted, did his mother come to the Land of Israel and found the first churches. The first church in Nazareth was built in 427. When the Muslims arrived in 648, they destroyed the church. Only after the Crusaders conquered the city in 1101 was the church rebuilt. Two hundred years later the Mamluks, a Muslim dynasty, came and destroyed the church. Only when the Ottoman Empire weakened, were the Franciscans allowed to rebuild the church. The modern church was built in 1969. The contractor was Solel Boneh, the flagship construction company of Jewish workers. And so, one of the most important churches in the world was built by socialist Jews.

On the outside walls of the compound, and inside the church itself, there are icons and drawings of Mary from many different counties – Mary as an Asian woman, as a black woman, a Spanish woman. Some visitors don’t like seeing Mary as other than they know her, but one must remember that Jesus, as the Europeans formed his image – a white man with long blond hair – is also inaccurate. The main issue here, though, isn’t the image of Jesus, but rather the fact that Christianity evolved from a small Jewish sect from an unknown village to religion followed by a third of the world’s population.

The façade tells the whole story. A statue of Jesus stands at the top and under him one can see the angel Gabriel handing Mary the white lily, the symbol of the virgin of Mary. “The Angel of the Lord declared unto Mary.” Under it are the four Gospels. Left of the Gospels, it says, “So the Lord said to the serpent… he will crush your head, and you will strike his heel” (Genesis 3:14–15), which refers to the original sin. On the other side, the quote reads, “The virgin will conceive and give birth to a son, and will call him Immanuel” (Isaiah 7:14), which is the solution to the sin. The quote above the door describes what happened here – “The Word became flesh” (John 1:14), here in the house of Mary, God became human flesh and blood. In Hebrew, the word for flesh – “basar” – and the word for annunciation – “besora” – share the same root.

The façade of the church

The church belongs to the Franciscans, who have most of the Catholics sights in Israel. Their symbol is two crossed arms – the sleeved arm belongs to Francis of Assisi, and the bare arm belongs to Jesus. The symbol also depicts the Jerusalem cross, a cross with four small crosses on the sides.

Inside the Church of the Annunciation

Giovanni Muzio, the Italian architect, had a problem. On the one hand, he knew that thousands of pilgrims would visit the site. On the other hand, Muzio wanted the church to reflect the mystical, quiet character of the event. He solved the dilemma by constructing two floors: a dimly lit entrance floor and the second one full of light and designed to hold big masses.

The space of the church contains some archaeological sites, the most important of which is a cave that was the house of Mary, according to tradition. If there is no mass, you can descend the stairs to come closer to the cave. There is graffiti from the 2nd century that glorifies Mary in different languages, proving that pilgrims have been coming here for the last 1,900 years. The cave was probably a place of worship for the Jewish-Christian community. Next to the cave there is a mikveh, a ritual bath, carved in the rock.

The dome is the source of light, and from the inside resembles a white lily, the symbol of Mary. On the eastern wall, there is a huge mosaic. At the top there is a triangle with an eye inside – the symbol of God. The dove is the symbol of the Holy Spirit. Jesus stands next to St. Peter who holds keys (St. Peter is consider to be the first Pope and he holds the keys to the Kingdom of Heaven). Mary sits on the left in a blue garment.

On the premises of the church there is another church – St. Joseph’s Church, which is a modern church built on top of an archaeological site that today is the crypt of the church. But what I find interesting are the small statues on the outside wall of the church where you can see the holy family – Joseph, Mary, and Jesus. These are the only statues that I know of where the three are depicted together as a family and Jesus is not a baby, but a boy.