Tel Megiddo - From the first battle to Armageddon...

Tel Megiddo is a national park, which take about one to two hours to tour. It is much easier to get to the site by car because buses do not go directly to the sight. Many buses stop at Megiddo Junction, which is 2 kilometers (1.25 miles) from the entrance. For opening hours and entrance prices, click here.

The history of Tel Megiddo

At the end of World War I, General Allenby, who conquered the Land of Israel, was asked which title he wanted. Perhaps his answer should have been Jerusalem – the most important city he conquered. But Allenby, a senior military man, chose the title of 1st Viscount Allenby of Megiddo, and he knew why. Megiddo is one of the most important battlefields in the world, and Allenby himself commanded one of the battles of Megiddo.

The Gate that Thutmose III saw in front of him.

Very important battles took place and will take place in Megiddo. The three main reasons, as the saying goes, are location, location, location. Megiddo sits at a strategic point. The Land of Israel was and still is a narrow corridor between Egypt and Mesopotamia (the area of present-day Iraq and Iran), and since antiquity, the main route between these has been through Megiddo. In addition to the road, the foot of Meggido boasts a spring and the surrounding Jezreel Valley contains fertile agricultural land.

The first Meggido battle that we know of took place in the year 1480 BCE. It is the first documented battle in history. Megiddo, like all the cities in the Land of Israel, was a Canaanite city that paid taxes to the Egyptian kings. After Megiddo joined a coalition of cities that revolted and refused to pay taxes, the Egyptian king, Thutmose III, waged a campaign of war against the city. The documentation of the battle was found inscribed on the walls of a temple in Karnak, Egypt.

Thutmose III approached from Gaza with an army of 10,000 soldiers. As he reached the Carmel Mountain, he had three options: to bypass the Carmel from the east, from the north, or through Wadi Ara, a narrow valley leading directly to Megiddo. Though his officers advised him not to advance through the valley, the king wanted to have a surprise effect. He decided to go through the valley, where the Megiddo defenders wouldn’t suspect him. Thutmose’s goal was achieved; they were caught off guard, but Thutmose’s soldiers were so busy plundering what they found outside the walls that the Canaanites managed to close the gates before the Egyptians could enter. It took another seven months of siege until the city surrendered.

Some 500 years later took place the second known battle in Megiddo. In Karnak there is a list of cities that the Egyptian king Shoshenq conquered. In the Bible, it is written that King Shishak was in power during the same time that King Solomon ruled over Israel. After King Solomon’s death, King Shishak conquered many cities in the Land of Israel, including Megiddo. If Shoshenq is indeed the biblical Shishak, which is what most Egyptologists and archaeologists believe, then this battle is the first biblical event to have been corroborated by archaeological evidence. 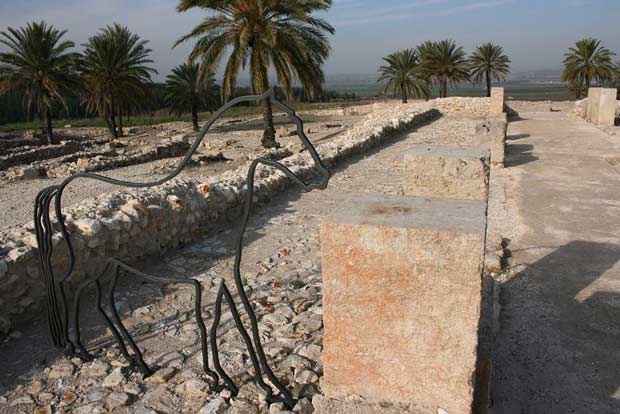 One needs a lot of imagination to see the strong biblical city it used to be.

Like the Egyptians kings before him, Allenby came from the south at the end of World War I. To deceive the Ottomans, he ordered his soldiers to march east during the day, and at night he brought them back with trucks so that the Ottomans would think that the attack would come from the Jordan River. On the morning of September 19, 1918, like King Thutmose III had done 3,400 years before him, Allenby attacked from Wadi Ara. And just like the Egyptian king had done, Allenby used horses in what was one of the last big cavalry battles of the world.

Megiddo is mentioned dozens of times in the Bible in a military context, but the most interesting battle in Megiddo has yet to happen – and that is the battle at the end of days between the forces of good and the forces of evil. The word Armageddon is actually a translation error of Har (“mountain” in Hebrew) Megiddo. According to the Book of Revelation, the last book of the New Testament, the war between Christ and the Antichrist, in which good will defeat evil, will start in Meggido.