Caesarea National Park is on the road from Tel Aviv to Haifa (Highway 2). There is no good public transportation to the national park. 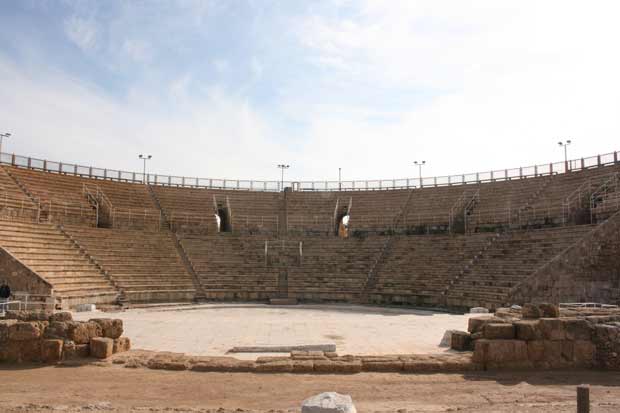 Every city has some kind of logic that defines it through the generations. It is a combination of its location, the people that lived in it and its history. The logic behind Caesarea was nicely put in the Talmud (the Jewish books):

Broken statues that were found

Close to the entrance there are some statues that were found in Caesarea. Although King Herod renovated the Jewish Temple in Jerusalem, the Jews suspected his intentions and didn’t see him as a legitimate king. Therefore Herod had built Caesarea as a Roman city from the very beginning. Caesarea is actually named after Augustus Caesar, who was Herod’s benefactor. The city was founded around the year 20BCE. After the Roman Empire converted to Christianity, most of the statues were thrown away. The statue of Jesus is from the time when Caesarea was a Christian city, between 324CE-648CE.

Augustus, patron of Herod, ruled by the idea of ‘bread and circuses’ and Herod built the city according to this motto. Unlike Greek theater, home to comedy and tragedy, in Roman theater players acted out mimes and pantomime shows that involved athletics, imitation, pornography and executions. The theater itself looked different in Greek and Roman times. In Greek times the theater would be built on a natural slope and look out onto the scenery. Roman theaters, like the one in Caesarea, were built on flat land and the view would be blocked by a wall behind the stage (the wall was high and thin and usually the first element to be destroyed). Today there are 3,000 seats but at the time of Herod there was another layer of seating and 7,000 people could enjoy the shows.

Caesarea is not a holy city and yet it has great significance in Christianity. When archeologists excavated the theater they found a stone with an inscription that mentioned the name Pontius Pilate, who was ruler at the time of the trial and crucifixion of Jesus. It is the only evidence that mentions him outside the New Testament. It is not surprising that it was found there. After Herod died his sons came to power, but the Romans were not satisfied with them and so they appointed Roman prefects instead. The prefects ruled from Caesarea.

In the New Testament it is said that Caesarea was the place where the first non-Jew converted to Christianity. Jesus and his first followers were all Jewish. Only after Jesus ascended did St. Peter come to Caesarea and baptize Cornelius the Centurion, a Roman soldier. St. Peter himself as well as St. Paul were imprisoned in Caesarea before being sent to Rome to be executed.

A replica of the stone mentioning Pontius Pilate.

The privet palace of Herod stood right on the water line. There are some mosaics and remains of the swimming pool. The sweet water in the pool was supplied by the nearby well. Driving north from Caesarea you can see an aqueduct that brought water to Caesarea, but it was built after the time of Herod.

Herod’s palace in Masada is much more impressive, but it is easy to imagine how nice it would have been to watch the sunset from the sweet water pool.

Half of the amphitheater (the side that was next to the sea) collapsed, but it is clear what the place looked like 2,000 years ago. The horse and carriages ran seven laps. The most expensive seats were after the turn because that was the most dangerous spot in the race, where many carriages clashed and overturned. Later on, another hippodrome was built outside the city and this amphitheater was turned into an arena where gladiators fought against wild animals.

Sadly, the most impressive structure that Herod built can’t be seen – the harbor (you can see part of its underground if you go diving). The amphitheater and the theater are all about games and pleasure. The harbor was the bread. The city was built around the harbor. Boats sailing from Egypt to Rome didn’t cross the Mediterranean but sailed along the shore. Their problem was that there were no harbors along the sandy beaches of the Land of Israel and boats had to look for shelter from storms in river mouths. Herod’s huge artificial harbor could host a hundred boats. The breakwater was 600-700 meters long and built with volcanic ash that turned as hard as concrete when it got wet. The volcanic ash was mixed with gravel and sunk to the bottom of the sea in wooden boxes. The harbor was not a show-off project but one that fulfilled a need. The Roman Caesars supplied free wheat to the people in order to safeguard their rule. The wheat came from Egypt, and in winter the boats didn’t have a safe haven on the eastern shore of the Mediterranean. Herod’s harbor provided sailors with a place to stay, do repairs and make preparations before continuing on their way. The harbor wasn’t in use for long; about a hundred years after Herod it collapsed. The small harbor you see today was built by the Crusaders and was in use in the 11th and 12th centuries.

After the destruction of Jerusalem in the Great Revolt (66-74), Caesarea came to be the governor city for 600 years, until Muslim conquered the Land of Israel in 640. When the Crusaders came in 1099 they rebuilt a small harbor. When the Mamluks conquered Caesarea they destroyed all the coastal cites to prevent the Crusaders from coming back. In 1884, after the Austro-Hungarian Empire took over Bosnia, a small Muslim village had to move to the Ottoman Empire; they built a small village at Caesarea, of which the minaret of the mosque is the only remaining evidence.