Jewish holidays and your trip to Israel - Traveling in Israel

An Israeli comedian summed up the abundance of Jewish holidays with the line: “They tried to kill us all, we survived, let’s eat”.

In this post I have attempted to summarize the main Jewish holidays and what they are about or, in other words, why we celebrate each holiday and what we eat. 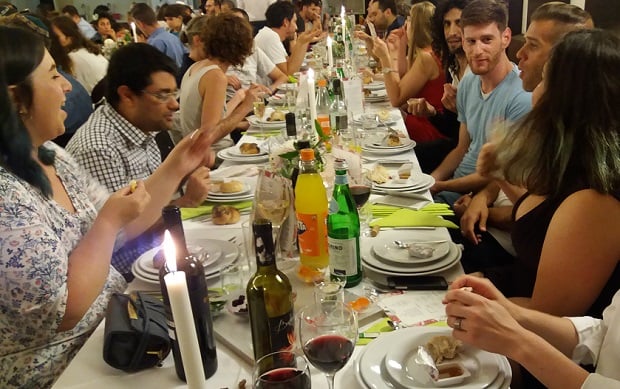 As a traveler, being in Israel during a holiday is an interesting experience but the holidays may also adversely affect you in some ways: there is no public transportation, all shops and supermarkets are closed, and usually hotel prices go up. Border control may also be closed (for those who plan to visit Sinai or Jordan).
Holidays can be divided into three different categories: biblical, rabbinic or connected to the State of Israel.

I have only written about the main holidays, those that have the greatest effect on everyday life in Israel. NB: the Jewish day starts at sunset the day before! So if Pesach is on April 11th 2017 then the Pesach meal, the Seder, is on the evening of the 10th.

In the Bible it is written that Passover marks the beginning of the year, but, for reasons that are unclear, by the 1st century it was being celebrated on the first of Tishry, which used to be the 7th month of the Jewish year, and is now the first month.
Date: 7th September 2021, 26th September 2022, 16th September 2023.
What happens: Families eat together. In synagogues there is a special prayer and blowing of the shofar (a ram’s horn)
What people eat: Apple with honey, dates and pomegranate.

Yom Kippur means Day of Atonement and it is considered by Jews to be the holiest day of the year. The ten days between Rosh Hashanah and Yom Kippur are days of asking for forgiveness from God but also for seeking reconciliation with people you have hurt. On Yom Kippur, God “seals” each person’s verdict for the coming year.
Date: 16th September 2021, 4th October 2022, 24th September 2023.
What happens: This is one of Israel’s most special days. The whole country shuts down. No planes land, no shops are open, no public transportation runs, no cars are driven, no TV is broadcast, no food is served in hotels. Many go to synagogues to pray (on this day the synagogues are at their fullest). Many secular Jews who don’t celebrate the holiday stay at home or ride bikes on the empty highways.
What people eat: They don’t: they fast (around 2/3 of Jews in Israel fast). 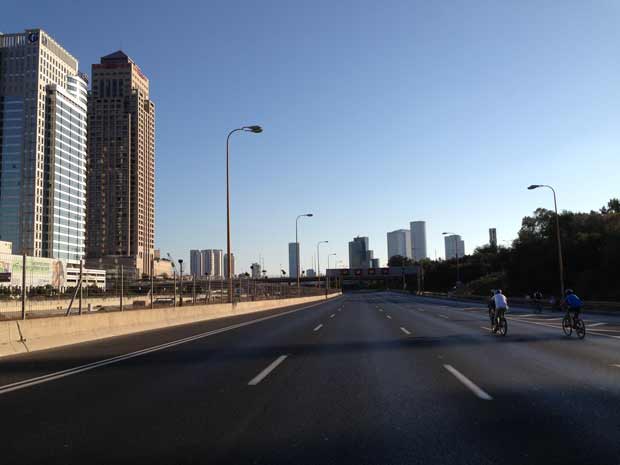 Yom Kippur in Tel Aviv. Riding bikes on the highway.

Also known in English as Feast of Tabernacles or Feast of Boots, Sukkot has a dual significance. The first is agricultural: the end of the harvest. Sukkot is one of the Three Pilgrimage Festivals. When the Temple stood in Jerusalem, all Jewish men went to pray there and brought crops from their fields to the priests during Pesach, Shavuot and Sukkot. The holiday also commemorates the exodus from Egypt and the forty years of fragile dwelling in boots in the desert. Observant Jews eat, and some sleep, for a week in a temporary dwelling (Sukkah) that is built outside their homes.
Date: 20th September 2021.
What happens: You will see many Sukkahs on balconies and outside houses. Every day of the holiday a special prayer is said while waving the four species – four plants mentioned in the Bible.
What people eat: Sukkot is the only Jewish holiday that doesn’t have any special food, though many eat fruit grown in Israel.

A not very pretty Sukkah outside a restaurant in Tel Aviv.

Every week Jews read a portion of the Torah (the first part of the Jewish Bible) in synagogues. On Simchat Torah, which means “Rejoicing with the Torah”, Jews celebrate the conclusion of the annual cycle of Torah reading, and the beginning of a new cycle.
Date: 27th September 2021, 16th October 2022, 6th October 2023.
What happens: Not much. People play music and parade with Torah scrolls outside synagogues.

Hanukkah marks the rededication of the Second Temple in the middle of the revolt against the Seleucid Empire in the year 164 BC. The revolt, which was started and led by the Maccabean family, ended in a Jewish victory and a small, independent, Jewish state. The holiday is celebrated for eight days. Unlike other holidays, which are from the Torah, Hanukkah (and Purim) were added later, by the Rabbis.
Date: 23rd-30 December 2019, 11th-18th December 2020.
What happens: One main candle is lit on a nine-branched candelabrum and on the first day another candle is lit, then every day another candle is added until on the last day all the candles are lit
What people eat: Sufganiyah (a type of jelly doughnut) and levivha (potato pancakes or latka).

Chanukah lamp next to the Wailing Wall. (Photo: monette)

Not only is Purim not mentioned in the Torah, but also the story did not take place in the Land of Israel. Rather it occurred in the ancient Persian Empire. Jews had lived there since being exiled from the Land of Israel by the Babylonians (586 BCE). Haman, one of the Persian king’s consultants, planned to kill all the Jews. Mordecai and his cousin Esther, who became Queen of Persia, managed to turn the lots (‘pur’ in Hebrew) that had been previously cast and Haman and his helpers were executed.
Date: 21st March 2019, 10 March 2020.
What happens: Dressing up in costumes. The book of Esther is read in synagogues.
What people eat: Oznei Haman (Haman’s ears) – a triangular-shaped pastry with a poppy seed filling. People drink alcohol and exchange gifts of sweets.

Pesach celebrates the Jewish exodus from Egypt and the people’s liberation from slavery. Pesach means ‘to pass over’ and it refers to God passing over the houses of the Hebrews in Egypt during the Ten Plagues. When the Temple stood in Jerusalem, all Jews would make a pilgrimage to Jerusalem during Passover and bring their first fruits to the priests.
Date: 20th April 2019, 9th April 2020. The holiday is seven days long, and businesses close on the first and last days.
What happens: Families get together for the Seder, a long meal that includes a reading of the Haggadah, the story of the exodus.
What people eat: There are many traditional Pesach dishes but the most important is matza, an unleavened flatbread. For a whole week chametz is not sold in Israel. Chametz designates all leavened foods: flour products that have been combined with water and left to stand for more than eighteen minutes.

On this day Israel remembers its fallen soldiers. Since there has been a war between Israel and the Arab countries every decade, many Israelis have a friend or relative who died in service.
Date 8th May 2019, 28th May 2020.
What happens: Many Israelis go to military cemeteries, where ceremonies are held.

The day after Yom Hazikaron Israel celebrates the Israeli Declaration of Independence in 1948.
Date: 9th May 2019, 29th May 2020.
What happens: Celebrations, performances and fireworks in all major cities.
What people eat: Many head to the parks for a barbecue.

Shavuot (Feast of Weeks or Pentecost)

Shavuot means ‘weeks’ in Hebrew and it is celebrated seven weeks after Pesach. Together with Pesach and Sukkot, it was one of the three pilgrimages to the Temple in Jerusalem. Like many of the Jewish festivals it is connected to the land, and Shavuot is the festival of the grain harvest. Another event that is celebrated in Shavuot is the day God gave the Torah to the nation of Israel on Mount Sinai.
Date: 9 June 2019, 29th May 2020.
What happens: Many kibbutzim and villages hold ceremonies in which the first crops are presented, as are any new babies that have been born. In synagogues the Book of Ruth is read and the Torah is studied through the night.
What people eat: Dairy foods.

Meaning the ninth of Av (the eleventh month of the Jewish year), this is a fast day in remembrance of the two temples that were destroyed on this date. The first temple was destroyed by the Babylonians in the year 586 BCE and the second by the Romans in the Year 70 CE. It is important to understand that the temples were the center of the Jewish faith. The prayers said today replace the sacrifices that used to be carried out in the temple.
Date: 11th August 2019, 30th July 2020.
What happens: Many restaurants and entertainment venues are closed. About 20% of the Jewish population fasts.